If you previously pushed a Git repository to 5apps Deploy, you may encounter a message like this since today:

It is safe to delete the offending line (line 23 in the above example) from your known_hosts file and accept our new host key.

The fingerprints for the various host key algorithms are as follows:

Please note: originally, this announcement was for Wednesday, July 11. However, we hit an unexpected roadblock during the initial migration and had to move the date.

As already announced on our system status site, We will be moving most of 5apps’ services to a new datacenter next Tuesday afternoon at 12:00 GMT. The planned impact will be as follows:

We will be putting the 5apps.com Web UI in maintenance mode for a planned maximum of 3 hours. There will be no downtime for hosted apps.

If you are using a custom domain, and it is routed to 5apps Deploy using a DNS A record with our current IP address, you will receive an email containing the new IP address sometime soon. However, we will be routing all traffic to the old IP to the new datacenter for a while, so you do not have to sweat anything. Just follow the instructions in the email at a time of your choosing.

The 5apps Storage Web UI will be put in maintenance mode for a maximum of 3 hours. This means you will not be able to authorize new apps, or revoke authorizations during that time. Your storage account itself will be put into read-only mode for a short amount of time within the maintenance window, so you can still read data, but not write any new data to it. Most remoteStorage-enabled apps will just keep working normally, and sync any data you changed during the window as soon as the account is writable again. Some apps will show an offline indicator/status.

Storage accounts will behave exactly like outlined above. Creating and deleting tokens will be possible under a new subdomain/URL, when 5apps.com is put into maintenance mode. You will be contacted by our team, who will also answer any questions you might have, and help in any way they can.

We’ve all been there before: you just deployed an update of your app to thousands of users, but then you realize something is wrong. Perhaps exception notifications start piling up, or you even see an outright blank page due to some nasty bug. In any case, finding the cause, fixing it, and deploying a new version, is oftentimes not a good option in emergency situations.

So we just launched a new feature for Deploy, which we had been testing and improving with some of our own apps for a while. You can now instantly rollback your deployments to earlier versions from your project’s deployments panel: 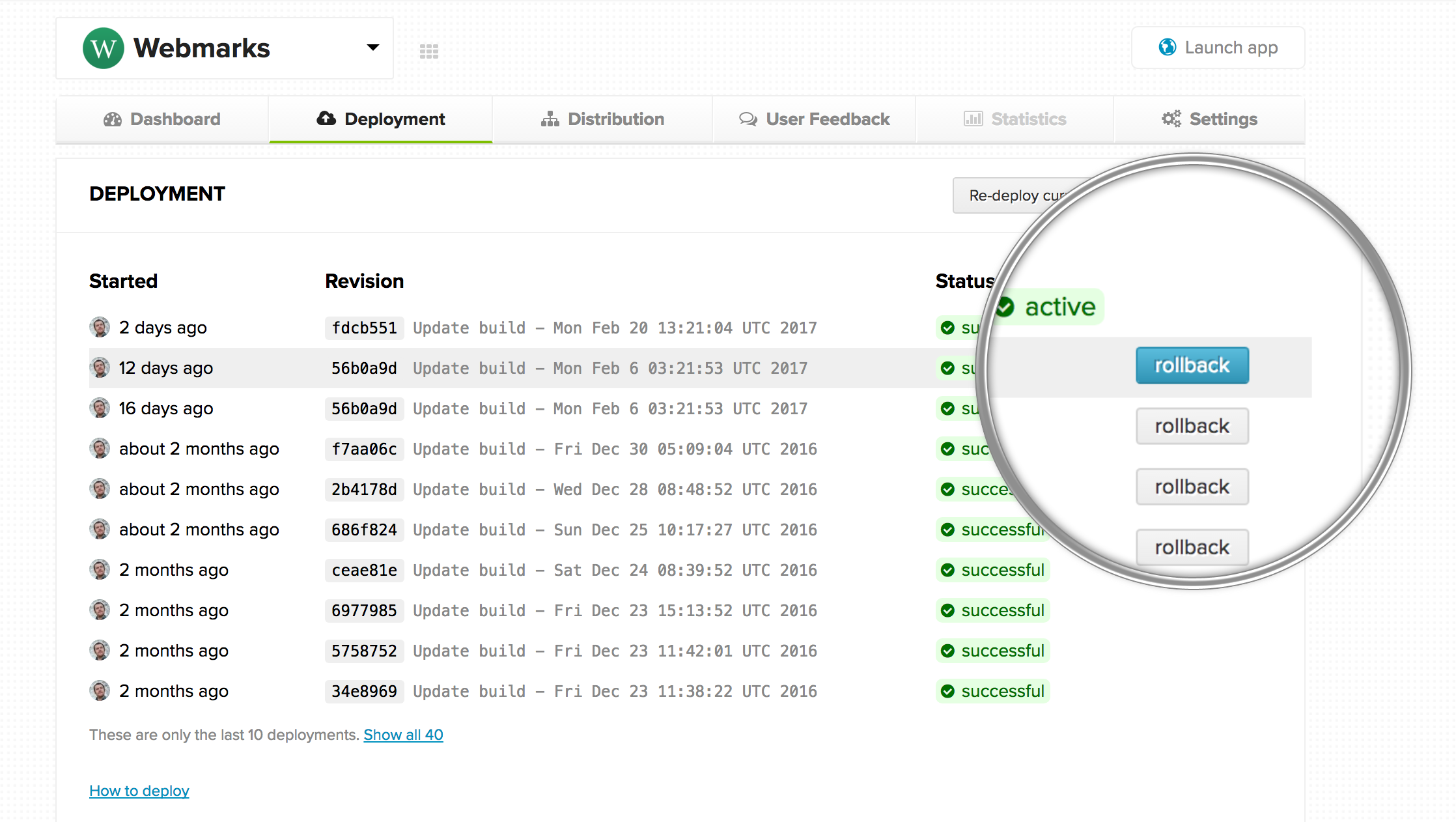 Within seconds of pressing that button, your app or site will be delivered in exactly the state it was after that specific deployment.

How does it work?

The buttons are fairly self-explanatory, but here’s what happens behind the scenes: We’ll keep the last 5 builds of your app in our storage backend, where assets are delivered from.

The build number of the active version of your app is then stored in our Redis cache, which our load balancers also use for determining if your app has History API enabled for example (i.e. direct all URLs to index.html).

When you rollback or forward your project to a different version, we just switch the version key in that cache, and the load balancers then immediately start delivering the assets for that specific version.

If you’re using AppCache (e.g. via our automatic AppCache manifest generation), then depending on how much time passed between the deployment and your rolling it back, users might have cached the latest version of your app, of course.

In that case, they’ll either have to wait until their next visit (default with AppCache), or you can always prompt them to reload, whenever a new version has been downloaded and cached in the background. For the latter, we also offer an automated deployment strategy, which you can enable by just flipping a switch on your app’s deployment settings page.

It’s no secret that we care a lot about open source software at 5apps. So we’re excited to announce that you can now receive notifications from 5apps Deploy in your Mattermost chatrooms:

You can set it up from the “Services” settings page in your app panel, where you could already connect Slack, Sentry, Ghost Inspector and other services:

We’ll be adding more services over time, and we happily accept your suggestions for new services to integrate. If you’d like to request a new one, you can do that straight from the settings page, using the link under the services selection.

Unfortunately, persona.org is finally being shut down this Thursday. We were big fans of both the BrowserID protocol and Mozilla’s Persona service. And so were our users. Around 30% of new accounts were created using Persona, until Mozilla announced its shutdown in January this year.

Personally, I still think it was a great idea, which unfortunately wasn’t met with enough enthusiasm on the side of the big email providers. But no point in wallowing in the past, so here’s what you can do, in case you signed up on 5apps.com via Persona and haven’t enabled another login option yet.

In addition to our existing GitHub login, we also just added support for Bitbucket and GitLab.com. All of these options will also import your SSH public keys to 5apps Deploy, in case you’re signed up for it.

You can enable these options on the Connections page in your account settings, after logging in with Persona (before Thursday) or via username/password.

In order to enable password login, just go to your account settings and enter a new password. In case you can’t log in via any other method anymore, just request a password reset, and we’ll send you an email with a reset link right away.